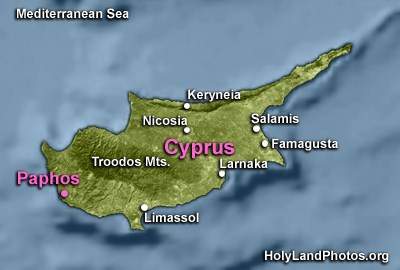 Paphos is situated on the western side of Cyprus.  The Ptolemies, the dynasty of Greeks ruling Egypt from the Egyptian port city of Alexandria, established it as a major port and the capital of the island of Cyprus during the third century B.C.  It continued to be the capital of Cyprus when the Romans took over the island (58 B.C.) until a series of major earthquakes devastated it in the fourth century A.D.

Paul, Barnabas, and John Mark visted Paphos on Paul’s first missionary journey (Acts 13:6, 13).  There, a sorcerer (Elymas) was confronted by Saul (soon to be called “Paul”) and its governor (proconsul) Sergius Paulus was converted to Christianity.