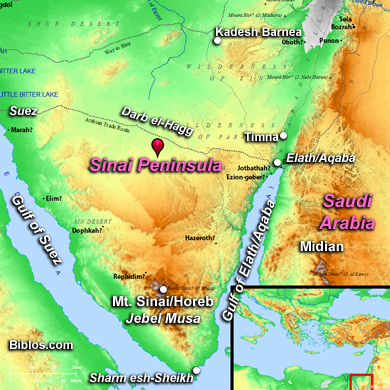 A track called the Darb el-Hagg (the “Way of the Pilgrimage”) connects Elath/Aqaba on the east with Suez on the west; it was of importance up through the late 1800s, as Egyptian Muslims used it on their pilgrimages to Mecca. During biblical times, this road connected Egypt with Midian (in Saudi Arabia) and provided the Egyptians with access to the copper mines at Timna, just north of Elath/Aqaba.

The southern tip of Sinai consists of dramatic, jagged granite peaks, some of which reach heights of over 8,600 feet.

For students of the Bible, the events surrounding the giving of the Law at Mount Sinai are of prime importance—traditionally located at Jebel Musa.

The complete development of this section is still in the future.