Kadesh on the Orontes 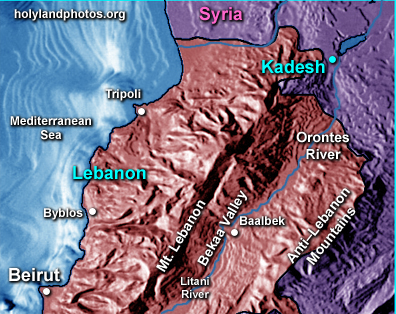 Kadesh on the Orontes River—also spelled Kedesh, Qedesh—is located in Syria near the Lebanese border.  The winding river in the image is the Orontes River that basically flows north at this point in its course.

It was here that the Egyptian Pharaoh Rameses II battled the Hittites in 1275 B.C.  The battle was basically a "draw" and Egypt continued to control the territory south of Kadesh while the Hittites controlled the land to the north—the Hittite homeland was in central Anatolia.

In 1258 Rameses II made a treaty with the Hittite ruler Hatussilis III confirming this arrangement.  Click Here to view a cuneiform copy of the treaty.  For information on the Battle of Kadesh see pp. 125–27 in the Zondervan Atlas of the Bible.

Some scholars believe the Rameses II was the Pharaoh of the Exodus.