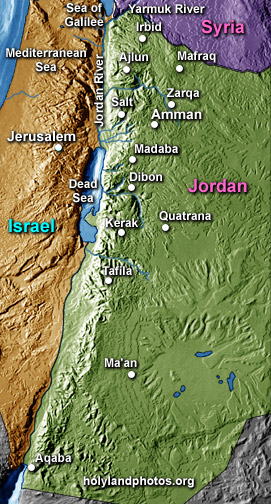 We have just begun to add images of places found in the Hashemite Kingdom of Jordan.  In modern times this kingdom stretches from the Yarmuk River in the north down to Aqaba on the Red Sea.

In ancient times, this area, east of the Rift Valley, consisted of Gilead in the north and was home to the Ammonites, Moabites, and the Edomites as well as the Israelite tribes of Manasseh, Gad, and Reuben.

For convenience sake we have divided it into three regions: the North (= the area north of Amman), Central (the area south of Amman but north of Kerak), and the south (the area of Kerak and south).