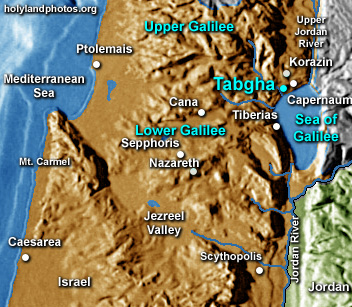 Tabgha (Arabic form of the Greek “Heptapegon” = “the place of the seven springs”) is located 1.6 mi. [2.6 km.] southwest of Capernaum.  Although not mentioned in the Gospels, it marks the traditional site associated with Jesus multiplying the loaves and fishes to feed 5,000 (Mark 6:30–44).

At least four Christian structures have stood on this site: a fourth-century chapel, a Byzantine Church (ca. A.D. 480), and two twentieth-century churches—the most recent being dedicated in A.D. 1982.  This latter church was built on the plan of the fifth-century Byzantine basilica.