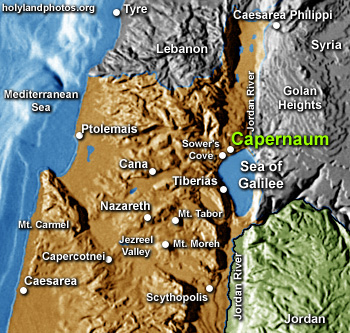 The Greek Orthodox "Monastery of the Twelve Apostles" is located just to the east of the Franciscan site of Capernaum on the north shore of the Sea of Galilee.  It is actually built on top of portions of the antiquity site of ancient Capernaum, although little of the property has been excavated.

The Orthodox Church purchased the property in the nineteenth century.  In 1925 the "Church of the Twelve Apostles" was built.  After the founding of Israel in 1848, the monastery turned out to be in "no man's land"—and thus not accessible.  It fell into decay.  In 1969, after the Six Days War of 1967, the monastery became accessible and in the 1990s the church was refurbished.

Between 1995 and 2000 the church was renewed and decorated with iconography by Constantine Dzumakis, a Greek iconographer.  The iconography shows saints who lived in the Holy Land and scenes from the Gospels: the quieting of the storm, the walking on water, the miraculous catch of fish, the healing of the paralytic, the Crucifixion and Resurrection of Christ, the Last Judgment, and others.