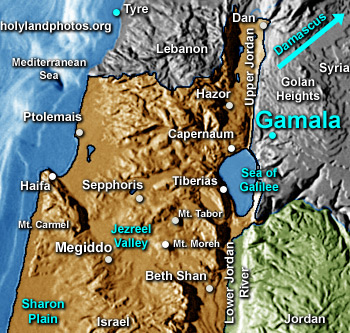 The site was probably first settled during the second century B.C., although coins as early as Antiochus I Soter (ca. 280 B.C.) have been found there.

During the great Jewish revolt (A.D. 66–70) the city eventually joined the rebels.  After a two-stage siege, the Roman Legions breached the city wall and slaughtered the inhabitants—Josephus (see War IV) says a total of 9,000 died.

The site has been excavated and a first century (the oldest in Israel?) synagogue, a ritual bath, a round tower, portions of the city wall, houses, olive press, etc. have been discovered.