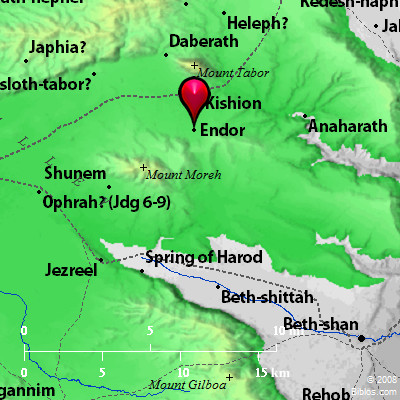 En Dor has been identified with Tell Zafzafot (Kh. es-Sufsafeh) that is located on a northeastern branch of the Jezreel.  It is located south of Mount Tabor on the northeastern slope of the Hill/Mount Moreh.

En Dor was allotted to the tribe of Manasseh (Joshua 17:11) and there remnants of Sisera's army were killed (Psalm 83:10).  According to 1 Samuel 28 the Philistines camped at Shunem, on the southern slope of Mount Moreh while Saul's troops camped on Mount Gilboa.  It was at En Dor that Saul approached a female medium and consulted with Samuel.