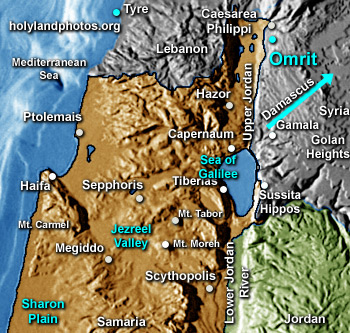 Omrit is a site that was situated in pre–1967 Syrian land but since 1967 it has been in Israeli controlled territory on the western slopes of the Golan—just above the Huleh Valley.  It is situated about 2.5 mi. [4 km.] southwest of Banais/Panias (= NT Caesarea Philippi) on the road that led from the Huleh Valley to Damascus.

Since 1999 J. Andrew Overman of Macalester College of St. Paul, Minnesota (USA) has been excavating the site.


Overman has discovered three successive religious structures—the earliest dating to the Early Roman Period.  The first religious structure he calls a "the early shrine." He believes that the first temple was built by Herod the Great to honor his patron—the emperor Caesar Augustus (ruled 28 B.C. to A.D. 14).  Many believe that his temple was constructed in nearby "Panias" but Overman argues (I think correctly) that it was here at Omrit—"in the vicinity of Panias"—that it was constructed (see the articles listed below).  The second "temple" was probably constructed during the reign of the Roman Emperor Trajian (A.D. 98-117).

For the excavation's web site and pictures Click Here.