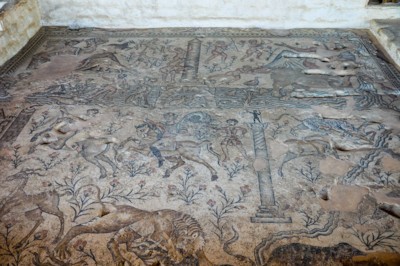 The "Nile Festival Building" is the name given to a large house or public structure, that was uncovered by a team from the Hebrew University led by Ehud Netzer and Zeev Weiss.  It measures 165 x 115 ft.  Rooms were built around a central courtyard and the structure may have served as a Basilica.  It is situated near the center of the Byzantine city on the east side of the Cardo—the main street of the city. It was built around A.D. 400 and was destroyed by an earthquake in the seventh century.

A number of mosaics were found in this structure, but pride of place must go to a Nilotic Scene in a large room that measures 22 x 20 feet.