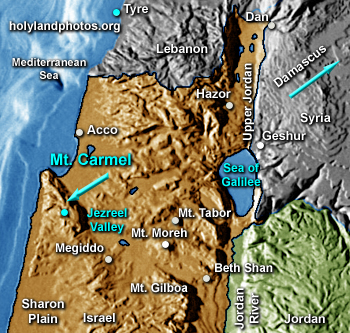 To the south of the Jezreel Valley rise the towering rock scarps of Mount Carmel. The name Carmel means “plantation,” “garden-land,” and/or “garden-growth,” and in Scripture, the lushness of the vegetation on Mount Carmel became a symbol of great fertility (e.g., Song 7:5; Isa 35:2; etc.).  Mount Carmel in a broad sense extends some 30 miles along a line running from the Mediterranean Sea in the northwest to the Dothan Valley in the southeast.  The northeastern and western slopes of the triangular-shaped range are quite steep.  Its highest point is at Muhraqa at 1,790 feet above sea level.