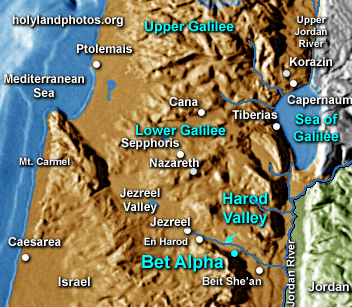 The site of Bet Alpha is located about 5 miles northwest of Beit She'an at the foot of the northern slope of Mount Gilboa, in the Harod Valley.

The synagogue faces towards Jerusalem and it is basilica in shape with a central nave and two side aisles.  There may have been (womens') balconies over each of the two side aisles.  The central nave is "carpeted" with a mosaic with three major panels depicting the "Binding of Isaac" (Genesis 22), a Zodiac with the sun god Helios riding a chariot in the center circle, and a panel depicting the "ark" where the Torah scrolls were kept along with Jewish ritual objects.

The synagogue dates to the sixth century A.D. and was destroyed by an earthquake. It was discovered in 1929 and excavated by E. L. Sukenik of the Hebrew University in Jerusalem.  Today it is located on the grounds of Kibbutz Hetzi–Ba.