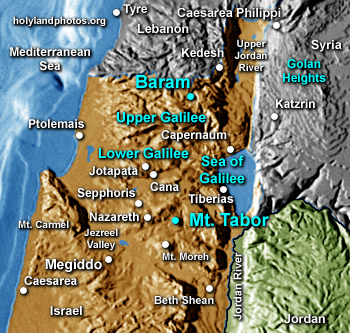 Baram is located in Upper Galilee, about 1.2 mi. [2 km.] south of the Israel Lebanese border.  It was the site of several ancient synagogues during the Talmudic Period and travelers in the Middle Ages comment on how beautiful the now destroyed ancient structures were.  Today the site is a National Park and boasts the best preserved ancient synagogue in the country.

In the 19th century the site was occupied and settled by Maronite Christians.  During Israel's war of Independence (known as "the catastrophe" to the Arabs) the inhabitants were forced out of their village by the Israeli military forces with the promise that they could return after the fighting ceased.  The displaced inhabitants settled in nearby Gush Halav and other villages.  The request/demand to return by these Arab Christians was tied up on the Israeli court system for years, but ultimately the court ruled against allowing them to return.