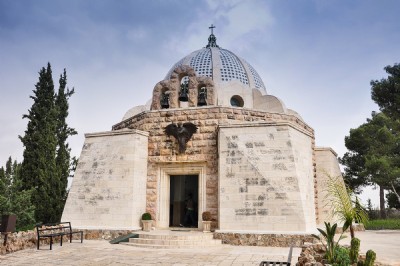 In the basin area to the east of Bethlehem, where the Hill Country of Judah begins to give way to the Wilderness of Judah, are fields given over to grain crops and grazing.  It is in this area that Christians have traditionally placed the shepherds who were tending their flocks by night when the Angel of the Lord appeared to them to announce the birth of the Savior in Bethlehem (Luke 2:8-14).

In this "section" we feature images of the Roman Catholic complex at Khirbet Siyar el–Ghanem that commemorates the event.  The church was dedicated in 1954 and the compound has been under continual development since then.

Actually, much of the area is today (2014) quite built up by dwellings and shops of Beit Sahur, the eastern suburb of Bethlehem.