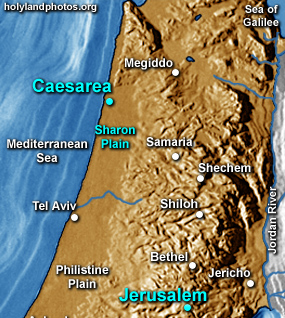 Herod the Great constructed Caesarea between 22 and 10 B.C. on the small site that had been called Strato's Tower. It is located on the coast of the Sharon Plain. During the New Testament era, it was the main port of Palestine, and Rome's representatives ruled Palestine from here for almost 600 years.

The Herodian city had a population of about 40,000, the Byzantine 100,000, and the Crusader city only 12,000 at the most. During the Roman and Byzantine periods, it boasted a theater, several palaces, an amphitheater,  a hippodrome, a synagogue, three aqueducts, bathhouses, temples, and three harbors - the largest being called "Sebastos," after the emperor.

During the Byzantine period, it was famous for its library and a variety of Christian scholars - namely Pamphilius, Origen, and Eusebius.

It has been and continues to be, excavated by a number of archaeological teams.