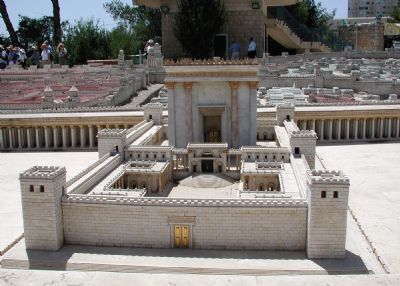 Since the 1960’s a 1 to 50 scale model of Jerusalem as it appeared just prior to the Jewish Revolt against the Romans (A.D. 66–70) has been located on the grounds of the Holy Land Hotel in west Jerusalem.  Around 2006 it was moved to the campus of the Israel Museum.

The first major archaeological advisor was the world expert on Second Temple Jerusalem, Professor Michael Avi–Yonah.  Since then the model has been expanded and modified as new discoveries have come to light—under the auspices of a number of experts.

Some of the images in this section were taken when the model was on the grounds of the Holy Land Hotel.