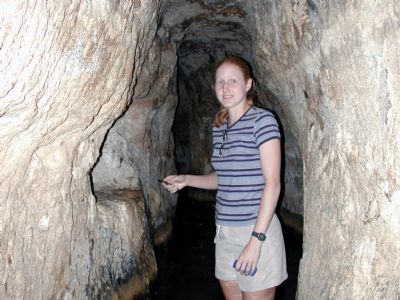 The Judean king Hezekiah (715—686 B.C.) built a tunnel to transport water from the Gihon Spring to the Pool of Siloam.  It is 1760 ft. [536 m.] in length.  At the beginning the ceiling is very low, but at the Siloam end it is quite high.  It seems that it was built to bring water from the east side of the city to an area inside the wall closer to the newly inhabited western portion of the city and possibly to protect the city’s water supply during the siege of the Assyrian king Sennacherib (701 B.C.).