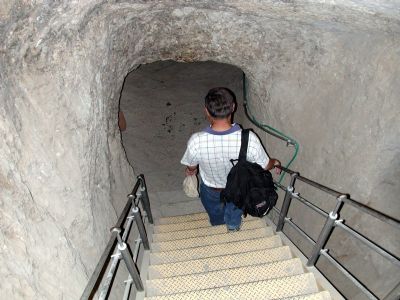 One water system, known since the mid 19th century, is called Warren’s Shaft or the Jebusite system.  It consisted of a diagonal sloping tunnel, about 123 ft. [37 m.] long that ended at a spot where a vertical shaft dropped 36 ft. [11 m.] to a spot where water could be drawn.

Recent discoveries near the Gihon Spring have suggested that an alternative system was used at an early period that consisted of the “Diagonal Sloping Tunnel” that led to a pool – rather than Warren’s Shaft – from which water was drawn.