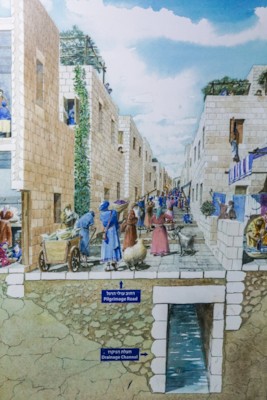 This section contains images of the first century A.D street that leads up from the plaza by the Pool of Siloam to the Temple Mount.  The street seems to follow the contour of the Tyropoean Valley and most of it has been excavated.

The section also contains pictures of the interior of the large drain/channel that flows from north of the Temple Mount down the line of the Central Valley all the way past the area of the Pool of Siloam.  A number of drains feed into this mainline.

The drain is about 10 ft. (3 m. high) and 3 ft. (1 m. wide).  It has been excavated all the way up to the Western Wall.  The drain seems to follow the contour of the Tyropoean Valley. Note the well carve "ashlar" stones of the wall and the ceiling!

According to the Jewish historian Josephus, during the Roman siege of Jerusalem in A.D. 70 Jews tried to escape the city and to hide in drains such as this.

It is possible to walk through the Pilgrims' Street and this Channel all the way up to "Robinson's Arch"—up to southwestern part of the Herodian Temple Mount Platform.