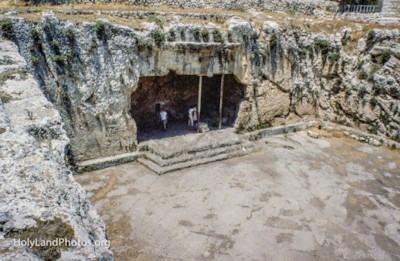 The Tomb of the Kings complex is located north of the Old City of Jerusalem—it is also known as the Tomb of Queen Helena of Adiabene.  It dates to the first century AD.  Most scholars believe that it was constructed by Queen Helena of the country of Adiabene that was located in NE Iraq.  She and her son converted to Judaism and lived in Jerusalem for 20 years.  After her death, her son, Izates, buried her by the "pyramids" in Jerusalem (Josephus, Antiq. 20:95)—probably where this burial site is located.

The area is hollowed out of the bedrock and is composed of a staircase that leads down into a large courtyard.  There is a monumental entrance to the tomb complex that is entered via a small opening covered by a rolling stone.

Some scholars believe that the tomb was for King Herod Agrippa I.