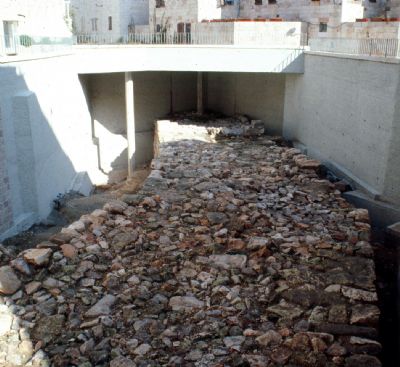 During the rebuilding of the Jewish Quarter of the Old City of Jerusalem in the 1970’s Nahum Avigad was entrusted with the archaeological work conducted there.

One of the most important discoveries of Avigad was over 650 ft. [200 m.] of a 23 ft. [7 m.] wide and 10 ft. [3 m.] high wall that dated to the eighth century BC.  This discovery was proof positive that the city had expanded to include a large portion of the western hill of Jerusalem during the eighth century.

This was probably due to the influx of Israelites from the north who fled to Jerusalem for protection from the Assyrian advance in the 730’s and 720’s BC.  What better place to flee to than the city the God had chosen for his “residence” (Psalm 132!).

This wall protected what would be called the “Mishneh” or the “Second Quarter”—where Huldah the prophetess lived (2 Kings 22:14–20).   This is the same wall that was built during the days of the Judean king Hezekiah (715–686 BC; Isaiah 22).