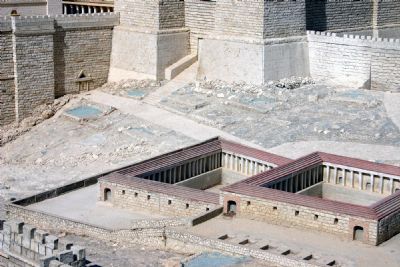 The “Pools of Bethesda” are located in the northeast quadrant of the Old City of Jerusalem, in the Moslem Quarter, just inside the Lion’s Gate.   They are slightly north of the temple mount (the Haram esh-Sharif) in a not-now-so-visible valley on the northern ridge of the eastern hill.

Water was collected here as early as the eighth century B.C. (possibly “the upper pool” of 2 Kings 18:17; Isa 7:3).  The high priest Simon added a second pool about 200 B.C.  Thus the area had five porticoes: four surrounding it and one on the “dam” in the middle that separated the two pools.

Many identify this five–portico complex with that mentioned in John 5—where Jesus healed a thirty–eight year old invalid.

To view the Church of Saint Anne that is located near the Pools of Bethesda Click Here.