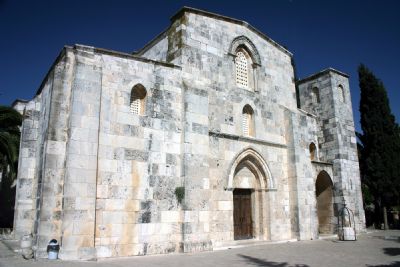 St. Anne’s Greek Catholic Church is located in the Muslim Quarter of the Old City of Jerusalem, near the Lion’s Gate and just east of the Pools of Bethesda.

It was built by the Crusaders around A.D. 1140.  In 1192 Salah edh-Dhin turned the church into a Madrassa (Muslim theological school)—as per the Arabic inscription above the entrance to the building.

It eventually was abandoned and by the mid–nineteenth century the roof had collapsed and it was filled with debris.  The Ottoman Turks gave it to the French—for their help in the Crimean War—in 1856.  The French restored the church and now the Greek Catholic “White Fathers (color of their robes)” maintain and administer the church and grounds.

According to tradition the church is built over the home of Joachim and Anne—the parents of Mary, the mother of Jesus—and it is believed that Mary herself was born here.  This memory is preserved in the grotto located in the south aisle of the church.