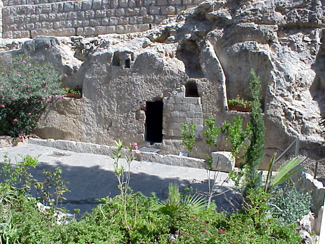 This tomb was discovered in 1867, at which time it was proposed that this was the burial place of Jesus, mainly because of its nearness to what would become known as "Gordon's Calvary".  Since that time, some Protestant piety has encouraged this identification, although the wardens of the property (The Garden Tomb Association) stress that it is the resurrection of Jesus, not the issue of finding the exact spot of his burial, that is important.

Inside of the tomb are the partial remains of a burial bench. The date of the tomb is not certain, but it may, in fact, date to the late Old Testament era, and thus would not have been a "new tomb" (Matt 27:60; John 19:41) at the time of the crucifixion. For a view of a very typical tomb of the New Testament era, click here.

Personal comment: in spite of my appreciation of the sincerity of those associated with the Garden Tomb, it is my opinion that the Church of the Holy Sepulcher preserves a more accurate tradition with respect to the sites of the crucifixion and burial of Jesus.

To visit the offical site of the Garden Tomb Association Click Here.

After viewing the images, if you wish to see what was (vandals destroyed it) the best Rolling Stone Tomb in Israel Click Here.