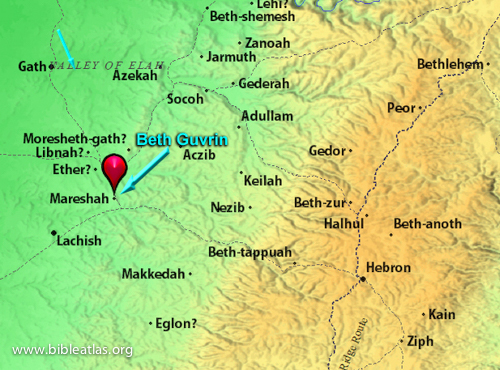 During the Early Roman period nearby Beth Guvrin replaced Maresha as the hub.  The Roman army controlled the site after the Jewish Revolt was put down in AD 70.  In AD 200 Septimius Severus declared it a "free city."  It ruled itself according to Roman law and Roman troops were settled there.  He changed its name to Eleutheropolis (the free city).

At that point Idumeans, Jews, Roman soldiers, and Christians lived in the city.  Most of the bell-shaped caves are from the Early Muslim period.  It was conquered and settled by the Crusaders for a period of time.

A Crusader fortress and church were built at Beit Gibelin by King Fulk of Anjou on the ruins of an Early Islamic fort.  This was granted to the Hospitallers in 1136.  Under their patronage and protection, a civilian settlement of 32 Frankish families settled there in AD 1160.