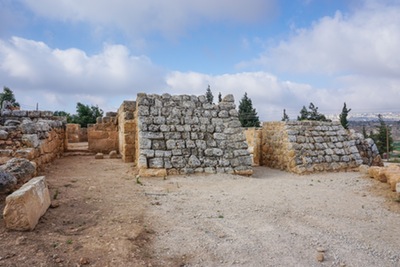 About 0.6 mi. south of the summit of Tel Shiloh is an unusual structure that has sloping walls.

This Byzantine structure (4th/5th century CE) faces south and apparently was a synagogue.  It's sloping walls were added later and in the 14th century it was a mosque called "The Dome of the Divine Presence" (Kubat al–Sechina).  In the 19th century it was called Jamah a–Sitin ("the Mosque of the Sixty").

Over the centuries some have thought that this is where the tabernacle had been located while others have argued that this is the site of the Tomb of Eli.