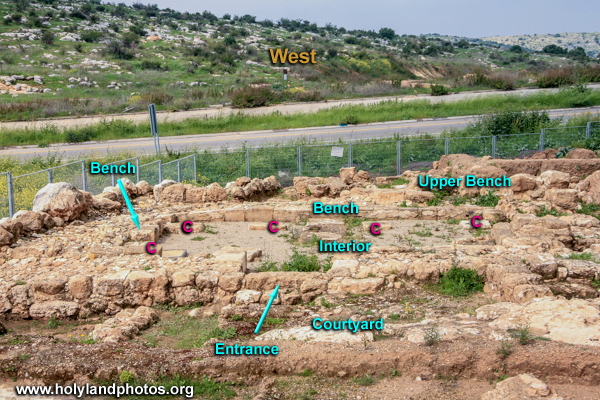 Umm el-‘Umdan (Arabic for “Mother of Columns”) is located south of the modern city of Modiin.  There, Shlomit Weksler-Bdolah and Alexander Onn have revealed a previously unknown synagogue—featuring eight imposing columns—likely built during the reign of King Herod (37–4 B.C.).  This makes it one of the very few known first century BCE! synagogues in Israel.

Directly beneath the Herodian synagogue lies a smaller synagogue constructed during the Hasmonean period, and beneath this was a structure securely dated to the end of the third or beginning of the second century BCE.  According to the excavators, this structure must have been contemporaneous to the time of the Maccabees and the Maccabean revolt! While this Early Hellenistic building influenced the location and shape of the two synagogues built atop it in subsequent centuries, the excavators believe that there is not enough information at the time to conclude that the Early Hellenistic building was also a synagogue.

If the excavators are correct in their interpretation and dating of the above mentioned three structures, then structures two and three (earliest) might well be the earliest synagogue(s) discovered in Israel!   They seem to suggest that structure 2 is a synagogue.

For more evidence confirming Umm el-‘Umdan’s Jewish identity in antiquity as well as a discussion of the linguistic relationship between the Hebrew name Modi’in and the Arabic name Umm el-‘Umdan, see “Modi’in: Hometown of the Maccabees” by Shlomit Weksler-Bdolah and Alexander Onn in the March/April 2014 issue of Biblical Archaeology Review.  And Bible History Daily.