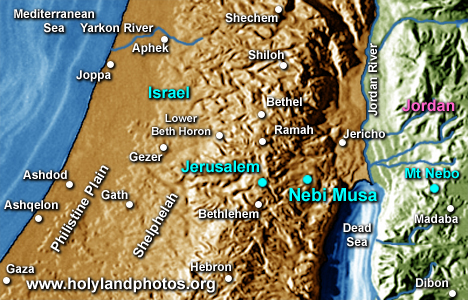 Nebi (Nabi) Musa is a Muslim shrine that is located 11 mi. east northeast from Jerusalem near the road that leads down to Jericho and the north end of the Dead Sea.  It is on the "road" that Muslim pilgrims from Palestine would take on their way to Mecca.  It is a day's journey from Jerusalem and one can see the top of Mount Nebo—where Moses is said to be buried—from there (Deuteronomy 34).  Eventually, some believed that Moses (=Musa in Arabic) was buried near the caravansary—rather than on Mt. Nebo, east of the Jordan River.

In AD 1269 the Mamluk sultan Babyars built a shine at Nebi Musa.  Between 1470 and 1480 a hospice was built there for the pilgrims.  In 1820 the Turks restored the property.  A seven-day pilgrimage to the site was developed to coincide with the Orthodox celebration of Easter.  At times the two communities clashed as political tensions mounted.  The pilgrimage also became anti-Jewish during the days of the British Mandate.  Eventually, after 1948, the Jordanian government suppressed the pilgrimage.