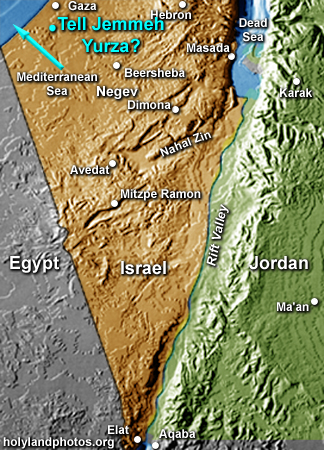 Tell Jemmeh (also called Tel Re'im and T. Gamma) is often identified with ancient Yurza.  It is a large mound on the southern bank of the Nahal Besor (Wadi Ghazzeh).  It was excavated in the 1920's by two expeditions including one led by Sir Flinders Petrie. In addition it was excavated in the 1970's by the late G. W. Van Beek.  Numerous archaeological periods are represented at the site but there were outstanding finds from the late Iron Age and Hellenistic Period.

Tell Jemmeh  is located about 8 mi. south of Gaza and served as a transit point heading into and out of Egypt to the west southwest.   It is very possible that the Assyrians mustered their troops here prior to their invasions of Egypt during the days of Esarhaddon (7th century B.C.).