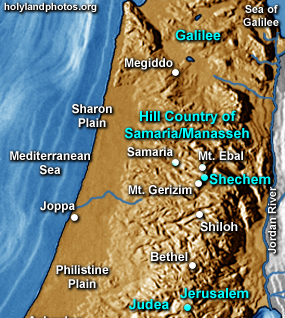 Shechem is mentioned close to 60 times in the Bible. It was an important non-Israelite center that figured prominently in the stories of Abraham, Jacob, and later Abimelech (Judg 9). During the days of Joshua it seems to have served as an Israelite tribal and religious center.

Shechem was located on the boundary between Manasseh and Ephraim (Josh 17:2, 7) and was designated as a Levitical city as well as a city of refuge (Josh 20:7; 21:21; 1 Chron 6:66, 67). It served briefly as the first capital of the N kingdom but was replaced by Tirzah and then Samaria.

To view a very useful web site on the modern (2011!) development of Tell Balata click here.  Here you can download a pdf diagram of the tell, pdf maps on how to get there, and plans for future development.  We wish them well!