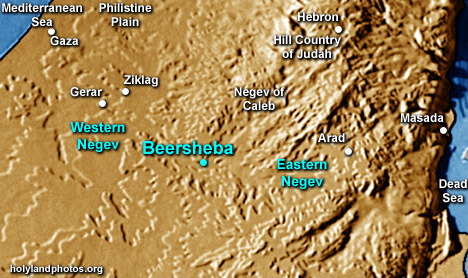 Beersheba was the administrative capital of the Negev region. It is situated where the eastern and western basins of the Negev meet. The wadi (occasionally flowing river) Beersheba that begins in the Eastern Negev flows just south of the tell -  flowing from east to west (right to left).

The area around Beersheba is barely usable for agriculture (10 in. [250 mm.] rainfall annually) and the site itself was more of an administrative center than a city. It is about 3 acres [1.2 ha.] in size. It was strategically placed, for it guarded the road that ran from Transjordan to Gaza on the Mediterranean Coast.  It also guarded  the route that proceeded from Beersheba into the Hebron area in the Hill Country of Judah.

The area of Beersheba is mentioned in association with Abraham, Isaac and Jacob. Beersheba was allotted to the tribes of Judah and Simeon (Josh 15:15:28; 19:2). From the period of David onward, Beersheba served as a southern outpost for the Judean kings. Indeed, the ideal boundaries of the land of Israel were "from Dan [in the north] to Beersheba [in the south]." Beersheba is mentioned 34 times in the Bible.