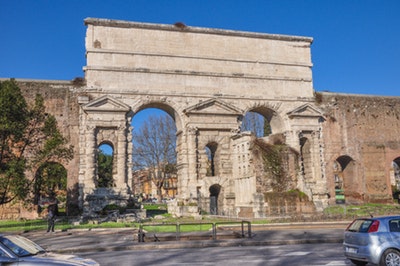 The Porta Maggiore ("the Great Gate") is located in the northeastern part of ancient Rome.  Inscriptions state that it was constructed by the Emperor Claudius (r.  A.D. 41–54) and that both Vespasian (r. 69–79) and his son Titus (r. 79–81) repaired it.

Adjacent to the gate is the tomb of Marcus Vergilius Eurysaces that was constructed BEFORE the gate was constructed.  The tomb dates to around 30 B.C.  Eurysaces was a freed slave who started a bakery and became very rich!  (His tomb is described in the following pictures)