Portus - the Harbor of Rome 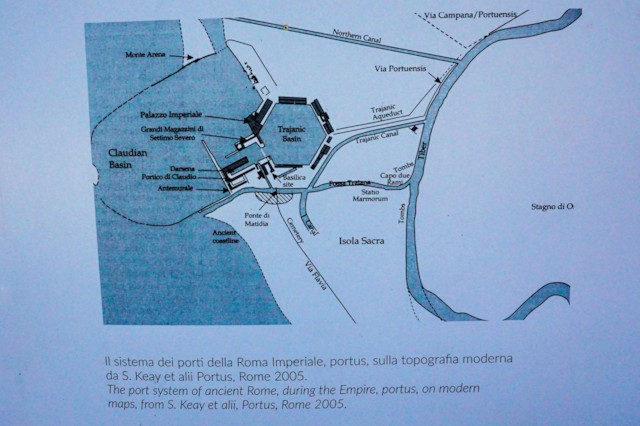 "Portus" was a port of Rome—along with Ostia, Puteoli, and others.  In the Late Roman Period, it was THE Port of Rome.  It is situated on the north bank of the Tiber River, about 2.5 mi. north of Ostia.  It was large enough for the huge grain ships to dock and discharge their cargo.  From Portus (and also from Ostia) the grain was loaded onto smaller ships (barges) and then transported up the Tiber River to Rome where it was distributed.

Emperor Claudius initiated Portus' construction in A.D. 42 although the large outer harbor (170 acres) was not completed until the time of Nero.  Around A.D. 100, Emperor Trajan (r. 98-117) added an inner hexagonal harbor (97 acres) that had docks and a paved bottom.  Later emperors refurbished it from time to time.  Portus continued in use through the Early Byzantine Period.

Although the remains of Trajan's hexagonal inner harbor are still visible, most of the harbor has been silted in and the area is now three miles inland from the seacoast.