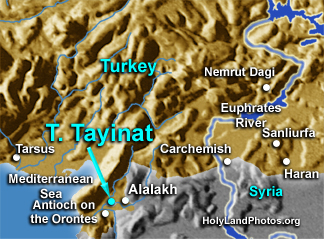 Tell Ta'yinat is a mound that is located in the southern portion of the Amuq Plain approximately 12 mi. [20 km.] east of Antioch on the Orontes and 30 mi. [47 km.] east of the shore of the Mediterranean Sea and only 0.5 mi. [800 m.] northwest of Alalakh!

It was an important center during the Early Bronze Age and especially during the Iron II Period—with major occupation here when nearby Alalakh was not extensively occupied.  Several temples have been discovered, including a tripartite one that seems to have affinities with the Solomonic Temple as described in the Bible.  The bit-hilani palace style was used throughout the Levant during the Iron Age including sites in Israel.  Numerous reliefs, statues, cuneiform tablets, etc. have come to light during the excavations!