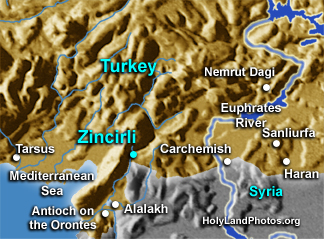 Höyük Zincirli (ancient Sam'al) is a 100 acre [40 ha.] site that is located in the northern portion of the Amuq Plain near the eastern foot of the Amanus Mountains.

It was excavated in the late 1800's by the German Oriental Society led by Felix von Luschan and Robert Koldewey.  The magnificent finds are displayed in the Pergamum Museum (Berlin), the Museum of the Ancient Orient (Istanbul), and the Antakya Archaeological Museum.

In 2006 the Oriental Institute of the University of Chicago began a long-term project led by Dr. David Schloen (the Neubauer Expedition to Zincirli).  For additional information visit the official Zincirli web site.