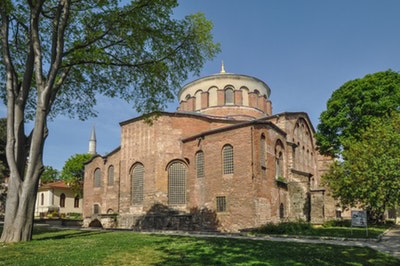 The Hagia Eirene is a church that was built by Constantine the Great (r.  306–337).  It is located to the north of the much–more visited Hagia Sophia—and it is smaller.  It was burned down during the Nika riots of 532 but was rebuilt by the Emperor Justinian in 548.  It was damaged in an earthquake in 740, but repairs were soon made by Emperor Constantine V.

After the conquest of Constantinople in 1453 by Mehmet II, the church was incorporated into the grounds of the Topkapi Palace.  It was not converted into a mosque, but served as an Arsenal for the Ottoman troops called Janissaries.  Today it serves as a museum and a concert hall.