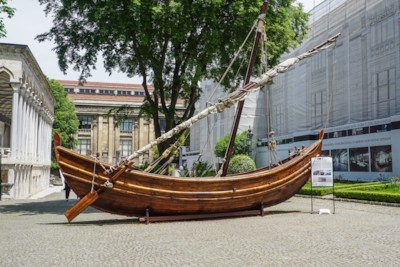 During the construction of a modern subway system under the Bosphorus, a large harbor was discovered that included the remains of at least 37 shipwrecks.

The harbor was built during the reign of the Byzantine Emperor Theodosius I (d. AD 395).  It was the largest harbor of Constantinople.  Two large granaries were located there and the harbor was in use through the 10th century AD.

Many of the objects are on display in the Yenikapi Subway Station.

One of the best-preserved ships is a small coastal seafaring merchantman that was 31 feet long.  It is labeled YK 12.

This past year the Turks and the Japanese completed an underground tunnel through which the "underground/metro" runs from Europe to Asia and back.  The tunnel is about 8.5 miles long and there are two lanes.  It costs about $1.20 for one way.