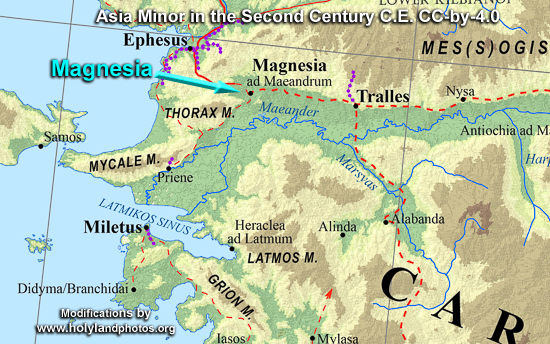 Magnesia (Magnesium Ad Maeandrum) is located 12 mi. (20 km.) southeast of Ephesus.  Today it is situated north of the banks of the Maeander River, which has changed its course over time.  It is on the road that led inland from Ephesus, east, up the Maeander Valley past Tralles and Nysa towards Hierapolis, Laodicea, and Colossae—and points eastward.  Occasionally, in ancient times it was the eastern terminus of the Royal Road that led from Susa in Persia (Iran) to this point—more commonly Sardis is given as the western terminus.

This map is based upon Asia Minor in the Second Century C.E. online at the Ancient World Mapping Center.  It is licensed under CC-by-4.0.  The original map is at 1:750,000 scale.