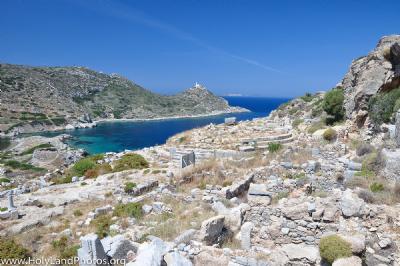 The Round Temple with its altar and auxiliary buildings is located on the upper terrace of Knidos occupying a prominent position at its western tip—overlooking the western harbor.  The temple dates to the second century A.D., but earlier remains have been found at the site.

Some have suggested that this may have been the famous (notorious?) temple that housed the beautiful statue of Aphrodite that was carved by Praxiteles in the first half of the fourth century B.C.  He was the first to sculpt the nude female form in a life–size statute.  For later examples of statues of Aphrodite click Here and Here or use the Search function above.