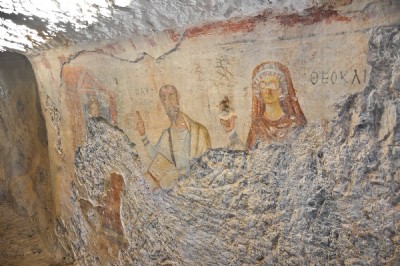 After passing through a barrel-vaulted vestibule the gallery walls were covered with up to four layers of paintings.  The earliest date to the late fourth century A.D. and the latest to the 12/13 th century.

On the western wall the painting portrays an event from the apocryphal text sometimes called The Acts of Paul and Thecla.  The painting depicts the initial event described in the book, in the city of Iconium, where Thecla is looking from a window [of her house?] at Paul preaching while Thecla's mother (Theocleia) looks on.  Thecla, against the wishes of her mother, Theocleia, gave up her betrothal (engagement) in order to remain a virgin and to follow Paul and eventually to become a preacher herself.

The cave seems to have served as a chapel from the early Byzantine period through the early 19th century.

The cave was excavated by Dr. Renate Pillinger from the University of Vienna in 1995. 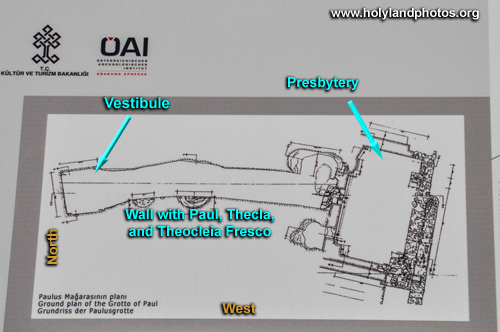