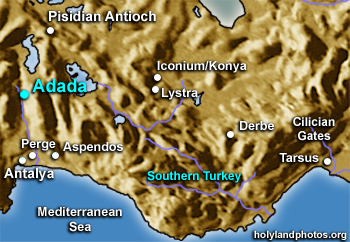 Adada is a well–preserved Roman city located 40 mi. [65 km.] north of Perge on the road that led from Perge to Pisidian Antioch.  It is probable that Paul and Barnabas passed through the city as they traveled south, descending from Pisidian Antioch to Attalia.

The city minted its own coins in the first century BC and it was very prosperous during the rules of the Roman Emperors Trajan, Hadrian, and Antoninus Pius (ca. AD 98–160).

The remains at Adada include a Forum, a theater, and temples to Roman Emperors! 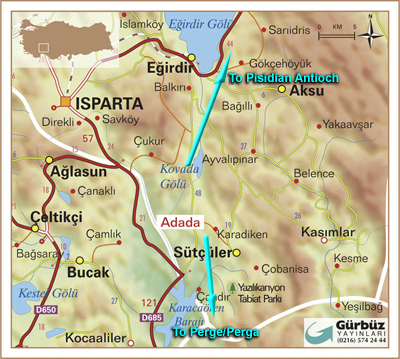 Dr. Mark Wilson notes that there were two routes that connected the Pamphilian Plain (Perge and Attalia) with Pisidian Antioch.  He suggested that Paul and Barnabas took the western route, the via Sebastia, from Perge to Pisidian Antioch but followed the quicker, but steeper central route on their return journey south to Perga (Acts 14:25)—thus passing through Adada on their return journey.