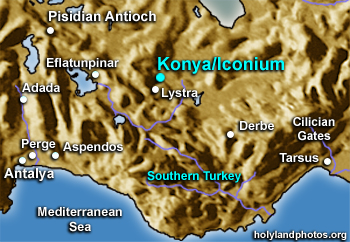 Konya is one of the most religiously conservative cities of Turkey.  It was the Seljuk capital from 1150 to 1300.  It is very famous as being a center of Sufi mysticism, a mystical branch of Islam — made famous by its whirling dervishes and the teachings of Mevlana (Jalal ad-Din Muhammad).

Probably the major shine in Konya is the "Mevlana Museum."   The "museum" was originally a dervish complex—tekke—but was turned into a "museum" in 1926.

There, Jalal ad-Din Muhammad Rumi is buried along with some of his relatives and early followers.  He is popularly referred to as "Rumi" or "Mevlana" (meaning "master").  Rumi developed a philosophy of spiritual union and universal love.