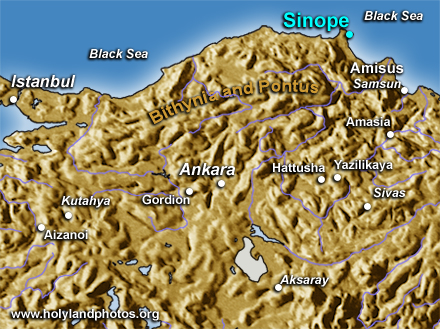 It was the birthplace of Diogenes (d. 323 B.C.) and for a while it was the capital of the Pontic Kingdom.

One of the recipients of 1 Peter?  Dr. Mark Wilson comments "Sinope was a certain stop in Pontus for the messenger carrying Peter's first letter." (p. 342).

Mark Wilson provides a good summary of the history of Sinope in his Biblical Turkey — A Guide to the Jewish and Christian Sites of Asia Minor.  Istanbul: Yayinlari, 2010, pp. 341–345.

At Sinope there is a marvelous museum that houses finds from the area.