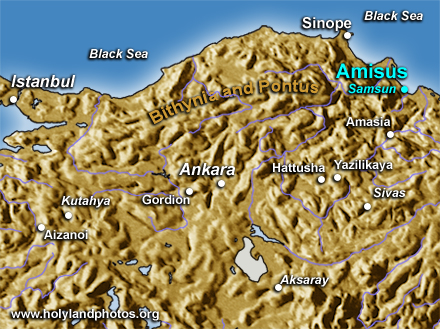 Ancient Amisus (Amisos) is identified with the modern Turkish city of Samsun on the shore of the Black Sea.  Greeks from Miletus first established it as a colony in the seventh century B.C.  In 47 B.C. it became part of the Roman province of Bithynia et Pontus.

Regarding 1 Peter 1:1—" Peter, an apostle of Jesus Christ, To God’s elect, strangers in the world, scattered throughout Pontus, Galatia, Cappadocia, Asia and Bithynia" —Dr. Mark Wilson suggests that "Peter's messenger undoubtedly embarked at Amisus . . . ."  (Wilson, p. 340).  And in addition suggests (along with others) that the now famous letters of Pliny the Younger to the Roman Emperor Trajan may have been referring to Christians in Amisus; Letters X.96-97).

Not much excavation has taken place in Samsun but a variety of finds—usually from emergency excavations—are on display in its Archaeological Museum.

Mark Wilson provides a good summary of the history of Amisus in his Biblical Turkey — A Guide to the Jewish and Christian Sites of Asia Minor.  Istanbul: Yayinlari, 2010, pp. 338–340.