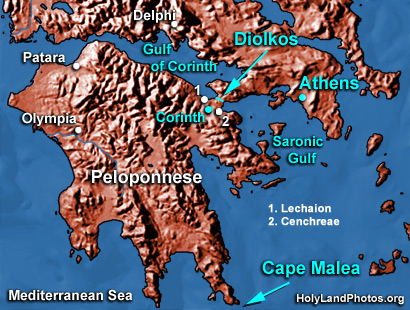 The Diolkos [Greek meaning “haul across”] was a paved “road” that connected the Corinthian and Saronic gulfs before the Corinthian Canal was dug.  It was built because sailing around the southern tip of the Peloponnese was very treacherous.  Strabo, for example, writes ‘But when you sail around Cape Malea, forget your home” (= “you’ll never return!”; viii 6, 20)

The Diolkos was constructed during the sixth century B.C.  It was made of large paving stones and was about 11 to 20 ft. [3.4 to 6 m.] wide. It ran from the southeast to the northwest across a narrow point of the isthmus and was about 3.7 mi. [6 km.] long

The ancients offloaded their cargo, and then dragged it on carts to the other side of the isthmus and loaded it on to another ship.  By doing this, they avoided the long and dangerous trip around the southern tip of the Peloponnese.

Some commentators believe that small boats were transported over the Diolkos.  This is possible for small boats, but is not probable for normal size Roman cargo ships.