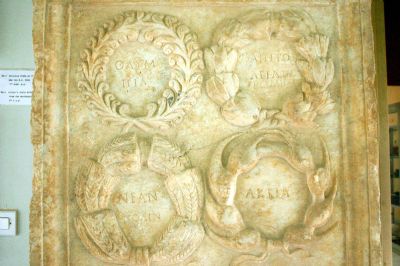 The museum at Isthmia houses a number of significant remains that were found at Isthmia, Cenchrea, and other sites in the area.

Included are stelae that celebrate the victories of an athlete and a musician at a variety of “games/contests.”

Games and music contests were held  every two years at Isthmia.  The activities included running, boxing, wrestling, the pentathlon, and horse and chariot racing.  In later times musical and poetry contests were added to the list of events.

Because of its proximity to Corinth, where Paul stayed for about 18 months, some biblical scholars believe that the apostle Paul may have “picked up” some of the “athletic imagery” that he uses in his letters from these game and that as a tent maker, he may have made tents for the athletes, officials, and visitors to the games.