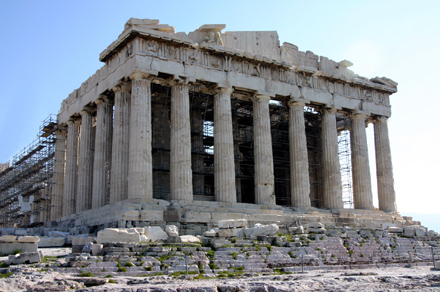 Although at certain periods in ancient times the Erechtheion was the most important temple on the acropolis, the larger and more prominent Parthenon came to dominate the terrain.

The current Parthenon was commissioned by Pericles and was built under the direction of the great sculptor Phidias and the architect Iktinos.  It was under construction from 447 to 443 B.C. and was the crowning achievement of the Golden Age of the Classical Period.

It was surrounded by 17 Doric columns on the north and south, and by 8 columns on the east and west ends.  Its major entrance was on the east.  It housed the 42 ft. [12.5 m.] tall statue of Athena Parthenos that had a wooden core that was covered with gold, ivory, and precious stones.

In its treasury room (opisthodomos) it housed a significant portion of the treasury of Athens.

In later years it served as a church and then as a mosque.  It suffered severe damage in 1687 when it was hit by a mortar round and the munitions that were stored in it exploded.

The reconstruction and restoration of the building has been going on since the nineteenth century—and continues to the present day.