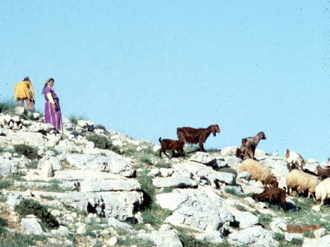 Flocks of sheep and goats have always been a prominent feature of the landscape in Israel and the other countries of the Near East.  There was not really a conflict between the shepherd and the farmer, as some commentators stressed, but rather families both farmed and had flocks of sheep and goats (they were, and are, grazed together).

In the fall and winter months the flocks were taken into the wilderness areas and grazed on the winter grasses—this while the grain crops were growing in the fields in the remainder of the country.  Then, in the late spring and early summer, after the grains had been harvested, the sheep and goats were brought into the newly harvested fields where they would graze during the summer months—fertilizing the fields as they fed.