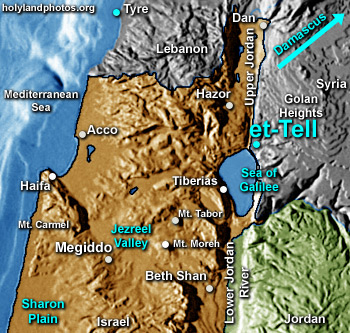 et–Tell is located 1 mi. [1.5 km.] north of the Sea of Galilee, slightly to the east of the present course of the Jordan River.  It is a large 22 acre [9 ha.] mound that has been excavated since 1987 by Rami Arav and Richard Freund.

Its identification with New Testament Bethsaida is possible, but not certain.  Bethsaida was the home of Philip, Andrew, and Peter—disciples of Jesus, and there Jesus performed a number of miracles including the healing of a blind man and the feeding of the 5,000.

However, the most significant archaeological remains are from the Old Testament Period and date to the Iron II Period.  The OT city was evidently destroyed by the Assyrian king Tiglath–Pileser III during his campaign in the area in 734 B.C.

The site is big—22 acres [9 ha.]—and probably was the capital of the kingdom of Geshur—the place that one of David’s wives (the mother of Absalom) was from (2 Sam 3:3; 13–20-38).  The most important archaeological finds are from this period.