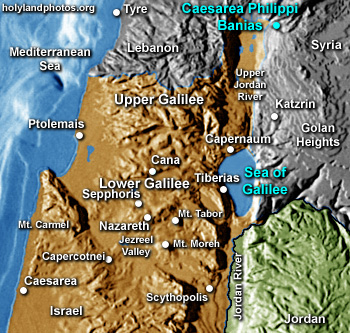 Caesarea Philippi is situated about 50 mi. [80 km.] southwest of Damascus at the foot of 9,232 ft. [2813 m.] high Mt. Hermon at one of the five headwaters of the Jordan River in the northern Huleh Valley.  It was originally called Paneas for it was here that the god Pan, among others, was worshipped.  Today it is called “Banias” for local Arabs have difficulty pronouncing the “p” sound in “Paneas.”

At the death of Herod the Great, in 4 B.C., this city along with various territories in the area was given to his son Philip.  In 2 B.C. Philip rebuilt the city and called it “Caesarea Philippi”—to distinguish it from Caesarea Maritima.